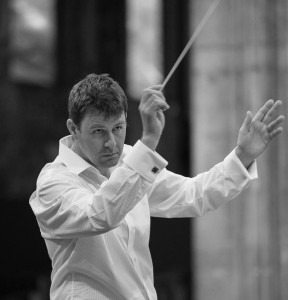 Timothy Redmond conducts and presents concerts throughout Europe. He is a regular guest conductor with the Royal Philharmonic Orchestra, both in the recording studio and the concert hall, and conducts many of the UK’s leading orchestras. He has given concerts with the Hallé, Royal Liverpool Philharmonic and Ulster Orchestras, with the BBC Concert, Philharmonic and Symphony Orchestras, and with the Royal Northern Sinfonia, National Youth Orchestra and Orchestra of Opera North. He conducts concerts every season with the London Symphony Orchestra, has a long-standing association with the Manchester Camerata, and in 2006 was appointed principal conductor of the Cambridge Philharmonic. He has recently guest-conducted orchestras in Bosnia, Estonia, Finland, Italy, Macedonia, Slovenia and the US and broadcasts regularly on TV and radio.

Timothy Redmond is well-known as a conductor of contemporary music. Since working closely with Thomas Adès on the premiere of The Tempest at Covent Garden, he has conducted critically-acclaimed productions of Powder Her Face for the Royal Opera House and St Petersburg’s Mariinsky Theatre. In 2010 he conducted the world premiere of The Golden Ticket, Peter Ash and Donald Sturrock’s new opera based on Charlie and the Chocolate Factory, for Opera Theatre of St Louis. The following season he conducted the work’s European premiere at the Wexford Festival and gave the first performance of a new oratorio by Edward Rushton with the London Symphony Orchestra.

In the opera house he has conducted productions for Opera North (Don Giovanni), English National Opera (world premiere of Will Todd’s Damned and Divine), English Touring Opera (Daughter of the Regiment, The Magic Flute, Carmen), Almeida Opera (world premiere of Raymond Yiu’s The Original Chinese Conjuror) and ROH Linbury (European premiere of Tobias Picker’s Thérèse Raquin). He has conducted at festivals in Bregenz (Austrian premiere of Richard Ayres’ The Cricket Recovers), Tenerife (Glyndebourne productions of Carmen, Gianni Schicchi and Rachmaninov’s The Miserly Knight) and Los Angeles (Barber’s A Hand of Bridge). He has also conducted opera for New York’s American Lyric Theater, at the Buxton and Aldeburgh Festivals and as a member of music staff at De Vlaamse Opera, Garsington and Glyndebourne.

His recordings include Dreams with the French cellist Ophélie Gaillard and the RPO (Harmonia Mundi), discs with Natasha Marsh and Mara Carlyle for EMI, and CDs with the Northern Sinfonia and Philharmonia. Recent highlights have included a concert of jazz-inspired works to conclude the LSO’s 2012 Stravinsky Festival, a series of concerts with the BBC Symphony Orchestra and the New York premiere of The Tempest, for which he assisted Thomas Adès at the Metropolitan Opera. Last season he toured to China with the Royal Philharmonic Orchestra, made his debut with the Rotterdam and London Philharmonic Orchestras and gave concerts in Macedonia, Germany and Finland. He also conducted the LSO in their annual BMW Open Air Classics concert to 10,000 people in Trafalgar Square and premiered a new production of Powder Her Face for ENO. This season sees the release of a new disc with Alison Balsom and Guy Barker for Warner Classics, a Henze double-bill for the Guildhall, his Hungarian debut with Concerto Budapest and regular concerts in this country with the Royal Philharmonic and London Symphony Orchestras.

Timothy Redmond studied at the Royal Northern College of Music, Manchester University and the Accademia Musicale Chigiana in Siena. He furthered his studies in masterclasses with George Hurst, Ilya Musin, Yan Pascal Tortelier and Pierre Boulez and as an assistant to Elgar Howarth, Valery Gergiev and Sir Colin Davis. He was recently appointed Professor of Conducting at the Guildhall School of Music and Drama.