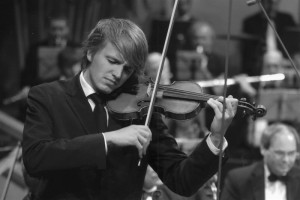 Maxim Kosinov is a violinist known for his ability to captivate audiences with his combination of virtuosity and sophistication. Born in St Petersburg in 1983, he combines the great Russian musical tradition with wide-ranging experience gained through a myriad of artistic collaborations in Europe. After graduating from the Specialist Music School in St Petersburg in 2001, Maxim went on to study with Uwe Martin Haiberg at the Universität der Künste in Berlin, where he obtained a diploma in 2009. His teachers also included key historic figures, such as the founder of the Taneev Quartet and Concertmaster of the Leningrad Philharmonic Orchestra during Mravinsky’s era, Vladimir Ovtcharek, in St Petersburg, and the period instrument pioneer Marie Leonhard in Amsterdam. He has participated in masterclasses with renowned violinists, including Gerard Poulet and György Pauk.

Since his first solo recital at the age of five, Maxim has regularly appeared as a soloist in Russia, as well as internationally in some prestigious venues such as the Philharmonic Hall in St Petersburg, Laeiszhalle Hamburg, and Seoul Arts Centre, to name just a few. He has performed with orchestras including the Sofia Philharmonic, the Opole Philharmonic, the Kammerakademie Potsdam, the Hamburg Symphony Orchestra, and the OSUANL orchestra in Monterrey, Mexico. In 2012 he went on tour to South Korea, where he performed sold-out recitals and delighted audiences and critics alike. Maxim won Second Prize and the Audience Prize at the Max Rostal Competition in Berlin among several other successes at international competitions.

From 2012-14 Maxim was Concertmaster in the Hamburg Symphony Orches-tra under Jeffrey Tate. Since August 2014 he has been Principal Concertmaster of the Münich Radio Orchestra. Maxim is very grateful for the generous support of the Gartow Foundation and the Zeit Foundation (Germany) as well as the Hattori Foundation (UK).