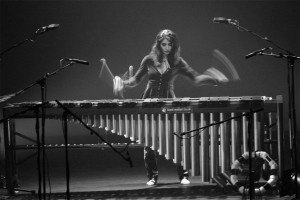 Awarded Dame Commander of the British Empire in 2007 Evelyn Glennie is the first person in musical history to successfully create and sustain a full-time career as a solo percussionist. As one of the most eclectic and innovative musicians on the scene today she is constantly redefining the goals and expectations of percussion by creating performances of such vitality that they almost constitute a new type of performance.

Since graduating with an Honours degree from the Royal Academy of Music, London in 1985 at the age of nineteen, Evelyn has given more than one hundred performances a year worldwide, performing with the greatest conductors, orchestras, and artists. Her diversity of collaborations include visual mixing of live music with the likes of DJ Yoda and the “Beat Boxer” Shlomo. She is also creating new challenges through her collaboration with the Dance Choreographer Marc Brew as part of the 2012 Cultural Olympiad. Other collaborations include Nana Vasconcelos, Kodo, Bela Fleck, Björk, Bobby McFerrin, Sting, Emmanuel Ax, King’s Singers, Mormon Tabernacle Choir, Fred Frith, and the Taipei Traditional Chinese Orchestra. Evelyn was a featured solo performer in the opening ceremony of the Deaf Olympics in Taipei in 2009. She was also guest performer in the Winter Olympics in Salt Lake City in 2002. In July 2012 Evelyn was honoured to take a lead role in the Opening Ceremony of the London 2012 Olympics. In collaboration with Underworld Evelyn led one thousand drummers for the world premiere of And I will Kiss and also premiered Caliban’s Dream on a newly developed instrument called the “Glennie Aluphone”, accompanying the lighting of the flame.

Evelyn is the leading commissioner of around 170 new works for solo percussion from many of the world’s most eminent composers. As a double Grammy award winner and BAFTA nominee Evelyn is in demand as a composer in her own right and records high quality music for film, television and music library companies. The film Touch the Sound and her enlightening TED speech remain key visual and audio testimonies to her world of sound creation knowledge and understanding. Her most recent film score was Golf in the Kingdom, released in the USA in 2011.

Experience based on presenting two series of her own television programme (Soundbites) for the BBC and several radio programmes led to regular appearances on television across the world, including The David Letterman Show, Sesame Street, The South Bank Show, Songs of Praise, Wogan, This is Your Life, Through the Keyhole, The Des O’Connor Show, 60 minutes, PBS Profile, Sky Arts Music Room, The Commonwealth Games Concerts, and Zingzillas; these demonstrate an incredible journey by an extraordinary woman who continues to develop and evolve.

Solo recordings now exceed twenty-eight CDs including the Grammy award-winning Sonata for Two Pianos and Percussion by Bartók and her collaboration with Bela Fleck. Shadow Behind the Iron Sun continues to be a best-selling album, demonstrating the brilliant improvisational skills of this groundbreaking performer. As a successful author she wrote her autobiography at the age of twenty-four and has written articles for Tom Tom Magazine for female drummers; she remains a keen lobbyist for change and improvement in the world of music education. As an eminent global activist in the world of motivational speaking her message is delivered loud and clear on “How to Listen” to a variety of diverse corporate companies, key educational institutes, as well as public and private events.

As a keen collector of percussion instruments Evelyn’s private collection is now estimated at over 1800 instruments. She continues to expand and explore natural materials such as stones and rocks to create new developments in the world of sound. Evelyn has collaborated with the Geology department at Leeds University in the UK on the development of two 21st-century lithophones. One of these instruments is now housed in the Linton room at the former home of John Ruskin at Brantwood, Coniston, UK and the other at the Portland Stone Quarry Trust in the Drill Hall, Portland, Weymouth.

With over eighty-six international awards to date Evelyn continues to feed the next generation through advice and guidance. As a consultant she offers prestigious and much sought-after masterclasses and lecture demonstrations to all types of instrumentalists. She also gives presentations to the sports world on visualisation techniques. Evelyn is based in the beautiful countryside of Cambridgeshire.