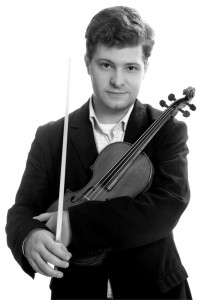 In 1997 he won a scholarship from the ‘Takasaki’ international competition for young violinists in Japan, and in 2006 he was awarded the Furtwängler Prize at Lübeck. He has taken masterclasses with the likes of Michele Auclair, Sachar Bron, Ruggiero Ricci, Wolfgang Marschner, Donald Weilerstein, and Kolja Blacher. Adrian has performed throughout Germany, France, Italy, England, Peru, and Romania, including concerto appearances with the Romanian Radio Orchestra, the Hamburg Symphony Orchestra, and the National Orchestra of Peru. In 2004, as part of the Schleswig-Holstein Festival, Adrian was selected by Ruggiero Ricci for a live broadcast performance of Paganini’s 24th Caprice. Between 2010 and 2013 he gave numerous solo performances with the Stuttgart Chamber Orchestra in Japan, China, South America, and Europe.

From 2004 to 2010 Adrian was Leader of the Lübeck Philharmonic Orchestra, and from 2010 to 2013 he led the Stuttgart Chamber Orchestra. Since 2013 he has been Leader of the Hamburg Symphony Orchestra under Jeffrey Tate. Adrian plays on a Maggini violin from 1604.