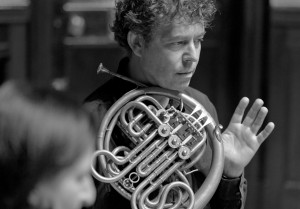 Stephen Stirling is principal horn of the City of London Sinfonia, co-principal horn of the Academy of St Martin in the Fields, and is also a member of the Endymion Ensemble, Capricorn, and the Fibonacci Sequence. Stephen is a Professor of Horn at Trinity College London.

His recording of all Mozart’s Horn Concertos, including the recently reconstructed ‘No. 5 in E-flat’, has been released by BMG on the Classic FM Full works label. He is accompanied by the City of London Sinfonia with whom he has also recorded the virtuosic Double Horn Concertos by Vivaldi.

He has taken part in many other critically acclaimed recordings, including Mozart’s entire output for wind ensemble with the Chamber Orchestra of Europe and his second recording of the Brahms Horn Trio, with the Florestan Trio, released recently by Hyperion, to rave reviews and a Gramophone award nomination.