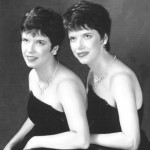 The Cann Twins’ international duo-piano career has taken them to Germany, Denmark, the Netherlands, the USA, Canada, New Zealand, the Middle East and Japan. They have performed concerti with many orchestras, including the Royal Philharmonic, London Philharmonic, BBC Concert Orchestra, Philomusica of London, Wren Orchestra, Royal Liverpool Philharmonic and London Mozart Players and at the Royal Albert Hall, the Barbican and in the International Series at the Royal Festival Hall.

The identical twins studied with Jean Merlow and Robert Pell before entering the Royal College of Music, London to study piano with the legendary duo-pianist Phyllis Sellick. and arranging for duo-piano with Gerald Gifford. They graduated with first class honours in solo and duo-piano performance, the only pianists to have ever done so, and as a duo they won Countess of Munster Awards, a PLG South Bank recital and Summer Scholarships to Banff, Canada, to study with Gilbert Kalish, Anton Kuerti and John Paul Sevilla. As postgraduates they were awarded the RCM’s most prestigious prize, The President`s Rosebowl and by invitation of H.M. the Queen Mother they performed at the Royal Lodge, Windsor for H.M. Queen Elizabeth.

The identical twins have had many works written for them by international composers and have given numerous premieres including the World Premiere of Timothy Blinko’s “Gemini” Concerto (commissioned with an award from “SoundSense”) with the English Sinfonia and Philip Ellis and the South Bank Premiere of the Max Bruch Concerto for Two Pianos and Orchestra at the Royal Festival Hall. In New York, they gave the World Premiere of Terry Winter Owens’ “Intimations of Celestial Events” for Trumpet (Antoinette) and Piano (Claire)

The Cann Twins have given duo-piano masterclasses in America and Europe and also at the Royal College of Music, London, Royal Northern College of Music, Manchester , Stetson University, Florida, and Loyola University, New Orleans, U.S.A. as Visiting Professors. Claire and Antoinette have appeared on television in the UK, Japan, USA and New Zealand and have broadcast on radio in Canada, Denmark, Germany, Israel and New Zealand. They are also broadcast frequently on Classic FM and BBC Radio 3.

Their recordings have won top awards, including Classic FM “Critic’s Choice”, Gramophone “Critic’s Choice”, HMV “Best 49 CDs” and “La Danse” was a rosette winner in the “Penguin Guide to Compact Discs”.
For more information on the Cann Twins please visit their website on www.canntwins.com or watch them performing in New York on Youtube –“Canntwins” “Strauss.”

“The Cann twins seemed perfectly attuned to one another and were a model of technical unity. Breathtaking brilliance, fluency and precision coupled with uncanny telepathic co-ordination confirmed this recital to be world class. This was a piano recital of a most special kind. “​The Gulf Times, United Arab Emirates
​
“….effortless virtuosity…..magically refined tone…..the Cann twins played together with fascinating perfection in the Frankfurter Hof.”​ Deutsche Allgemeine Zeitung

An unforgettable recording by the Cann sisters, a scintillating spontaneous collection of music including the finest Debussy Petite Suite in the catalogue.”
Gramophone Critic’s Choice